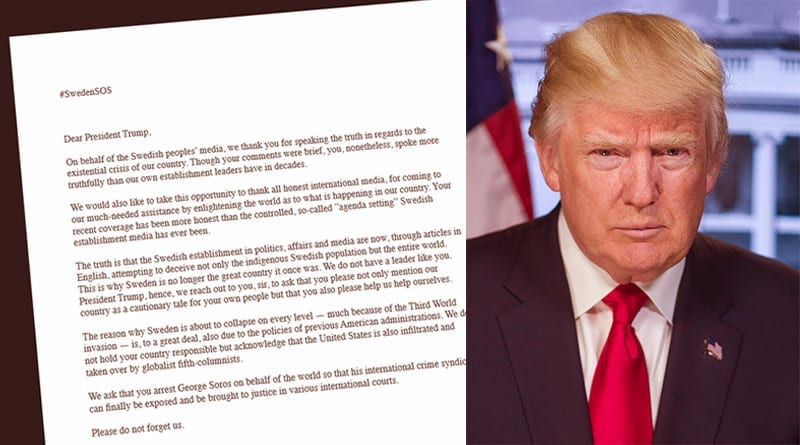 Share via
OPEN LETTER TO PRESIDENT TRUMP FROM SWEDEN
https://nyadagbladet.se/kultur/open-letter-president-trump-sweden/

Dear President Trump, On behalf of the Swedish peoples’ media, we thank you for speaking the truth in regards to the existential crisis of our country. Though your comments were brief, you, nonetheless, spoke more truthfully than our own establishment leaders have in decades.

We would also like to take this opportunity to thank all honest international media, for coming to our much-needed assistance by enlightening the world as to what is happening in our country. Your recent coverage has been more honest than the controlled, so-called ”agenda setting” Swedish establishment media has ever been.

The truth is that the Swedish establishment in politics, affairs and media are now, through articles in English, attempting to deceive not only the indigenous Swedish population but the entire world. This is why Sweden is no longer the great country it once was. We do not have a leader like you. President Trump, hence, we reach out to you, sir, to ask that you please not only mention our country as a cautionary tale for your own people but that you also please help us help ourselves.

The reason why Sweden is about to collapse on every level — much because of the Third World invasion — is, to a great deal, also due to the policies of previous American administrations. We do not hold your country responsible but acknowledge that the United States is also infiltrated and taken over by globalist fifth-columnists.

We ask that you arrest George Soros on behalf of the world so that his international crime syndicate can finally be exposed and be brought to justice in various international courts. Please do not forget us.

Sincerely,
Moder Svea and her children

The full letter can also be downloaded here.